When I was young, my family and I took a trip every year.  A lot of times we went to Florida since we have family friends down there but we also went many other places and learned and discovered new things.  Even when we weren’t taking trips out of the state, my parents always made sure our knowledge was being enhanced somehow whether it was going to the zoo or museum or park.  Being a parent myself now, I want to do the exact same thing for Addison that my parents did for me.  So last month, the three of us piled into our car and headed south.  Now granted this was a much different trip than Andrew and I had ever taken before; she was only ten weeks old and now we have to think about her needs instead of just ours.  A few weeks before we left, I started making piles of things to bring.  I’m one who always forgets something so I figured if I started early then I would have a much slimmer chance of forgetting something for Addison.  I did lots of research on road trips with infants and I also posted the question on Instagram and Facebook for recommendations on things I might forget.  The response I got from others was incredible and made our road trip experience very pleasant.

I thought I would share what I learned from our first road trip experience.  Again these are simply recommendations and what worked for us might not work for everyone.  Hopefully you can take at least one or two things away from this though! 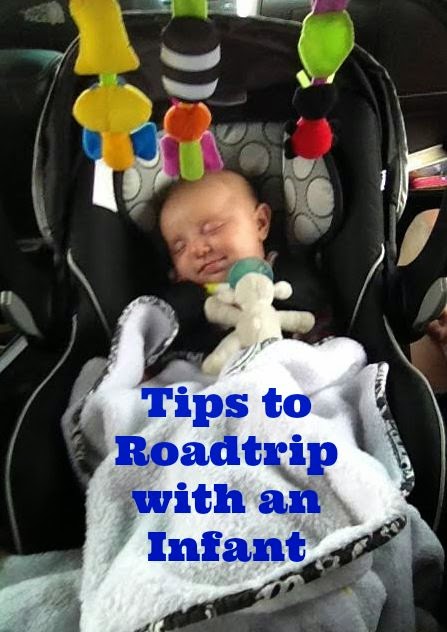 Feed the baby right before you leave.  I made sure we had everything completely done and packed before I fed her.  Right after I fed her, she went into her car seat and away we went.  Before we even pulled out of the driveway she was asleep so it worked out perfectly for us.

Pump as you ride.  If you are breastfeeding, purchase a car adapter or battery pack that you can use to pump as you go.  I would pump in the car and once Addison got fussy, we would get off the freeway, I would go sit in the back seat to feed Addison a bottle and we would keep going.  Then once Addison was finished eating, we would get off the freeway again to burp her and change her.  It was much quicker than stopping to breastfeed her along the way.  (Also, make sure whoever your driver is doesn’t drive past semi-trucks as your flashing your boobs.  I’m pretty sure by the end of our trip, Andrew was speeding up to the semis while I was getting situated.  He thought it was entertaining but he almost lost his life over it.)

Hang small toys from her carrier to keep your little one from getting bored.  My mom got us three small stuffed toys that velcro onto the car seat and hang right above Addison.  She was completely amazed with them when she was awake and was intrigued with the bright colors and noises they made.  It helped her from getting bored and fussy.

Keep lots of diapers, wipes, plastic bags and a change of clothes readily available.  As usual for any baby, there were lots of diapers that we went through.  There was also a small blow out that did require a change of clothes so make sure you have clothes nearby instead of just in the baby’s suitcase.  You may need them sooner than you think.  Speaking of blowouts…

Put a disposable changing pad underneath the baby before putting her into her car seat.  This was recommended by a friend and I never would have thought about it otherwise.  It was reassuring that we knew the car seat wouldn’t be soiled if Addison did have an accident through her clothes.  When it did happen (inevitable), we just tossed the disposable changing pad and put a new one in and the car seat was never dirtied.  Hallelujah!

Keep an open mind about where you’re going to change your baby.  The back of our truck was where her changing “table” was.  We pulled out a changing pad, laid it on the cooler and right there was where we changed her.  It might not have been a changing table in a bathroom but it was easy and convenient and that’s all we really needed.

Because Addison was so young when we roadtripped with her, we didn’t have to worry about keeping her on a schedule since she didn’t really have one yet.  She also doesn’t have any specific toys or stuffed animals yet that she needs to comfort her so we didn’t have to worry about forgetting that either.  She does have her WubbaNub though so if we would have forgotten that, we would have been in trouble.  The only thing that stayed consistent with her was that she had to eat every two to three hours.  I’m sure the older she gets the more we will adjust the way we travel with her.