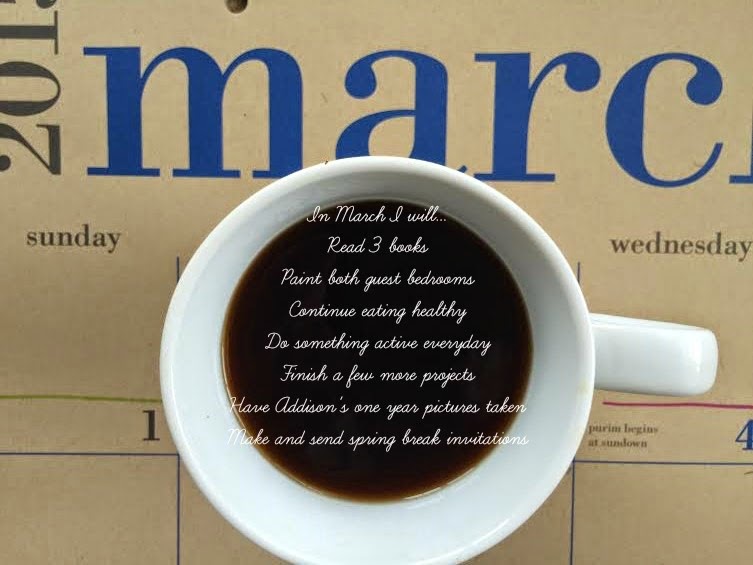 sorry about the silence over here the last few days. i went back to wisconsin for the long weekend and though my intentions of having posts prescheduled were good, the only one that actually happened was saturday’s link post. and visiting family and friends trumped blog posts so…my apologies.

let’s start talking about those goals for february. i stretched myself too thin. i had a feeling i was going to when i published them a month ago but i didn’t realize how little i would get done until the month was two thirds over. i only drank a glass of lemon water every morning for maybe two weeks but i did start eating a lot healthier and cooking for my family a lot more so i’m really proud of that. in fact i even started working out almost every day too and in order to maintain this healthy streak i’m trying to stick to, i created a new instagram account to hold myself accountable. you can follow me @eathappyfeelhealthy if you’re interested.

what else? addison’s one year old birthday pictures weren’t taken but we only have the weather to blame. it was all scheduled ready to go and the day we were supposed to take them it poured and was dark and miserable out. then i was out of town for a weekend and andrew was out of town the weekend after so they are getting done this month. i finished addison’s baby book and while i’m on that for a second, why is it that baby books are made to document every little thing for the first twelve months and then after that, the only pages left to fill in are two, three, four, and five year old birthday parties? is everything else just irrelevant after one year? i’m trying to find a way to keep up with everything going on with her now that the baby book won’t quite work. moving on…

i read one book and started a second but didn’t finish it, the spring break invitations are drafted in my head but not on the computer or printed or sent out yet, and four of the five 28 before 29 projects were made this month, just not blogged about yet so you can expect project posts in your near future.

i want to play catch up in march from everything i didn’t do in february so i’m keeping my goals light. some fun stuff, some of what i’m already doing and want to maintain, and some decorating of the house.