Hello readers of the lovely Erin Campbell!  As you know, Erin is a little preoccupied with being a rockstar mom, and has asked that some of her friends chip in a blog post while she takes on her new little one.  Initially I was prepared to compose a list of “Things That ‘They’ Don’t Tell You When You Leave the Hospital With Your Newborn.”  It was going to be fun, witty, snarky even, relatable and hopefully chuckle-inducing.  And still, I would like to talk about some of those things at another time, but tonight I was inspired to elaborate on just one of them- a big one, that “they” really don’t tell you about when you leave the hospital with your newborn: the strange, simultaneous, powerful, crazy, dueling, flat-out explosive emotions brought on by “one of those nights.”

Mamas, you know the nights (and even days) to which I am referring.  Where in one breath you feel like you could explode with all-engulfing LOVE, protectiveness and worry, and be simultaneously filled with frustration, anger and intense longing for your pre-child life…the emotion felt in that one breath pales any you have ever felt before.  There is no word for it.  The baby cries, you cry.  The baby screams, you scream. The mix of feelings are stirred ’round and ’round like the witches brew from Macbeth: eye of previously unknown zeniths of happiness, tongue of pride, toe of “I love you so much I would die without you,” blood of exhaustion, wing of depression, hair of the dog that I’ll need in the morning after consuming this entire bottle of Malbec in the short time it takes to watch a show on my DVR, etc.  It’s probably something akin to temporary insanity, and we moms know it well- though we were never prepped by “What to Expect When You’re Expecting,” or any of the baby books, on the subject. 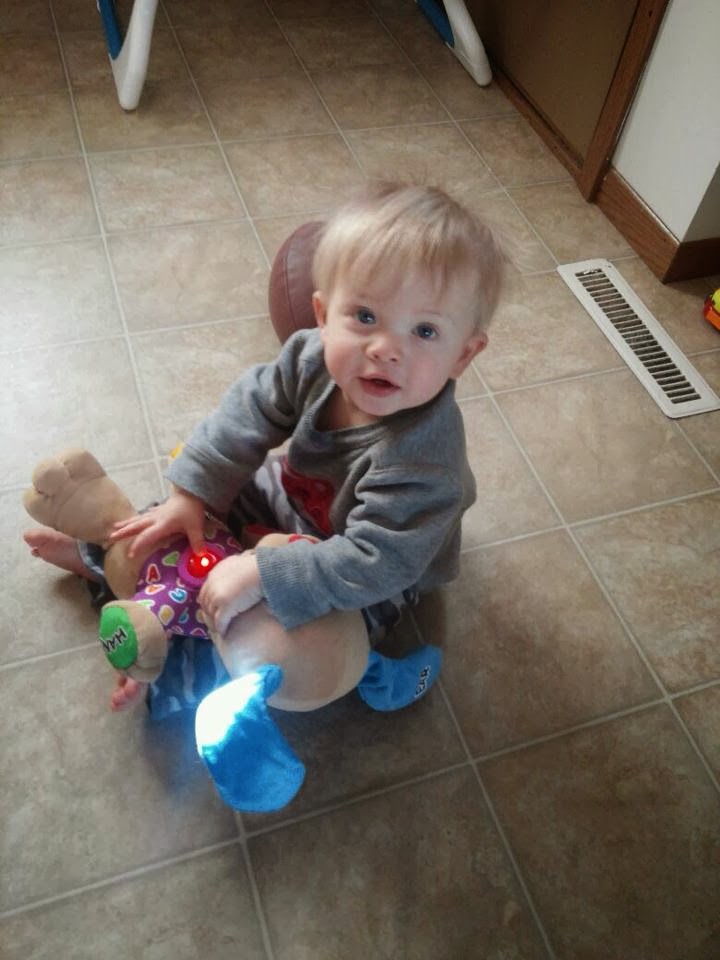 My son, a handsome, intelligent, energetic, hilarious, perfectly sweet, yet slightly demonic and quick-to-anger 13 month old, has been having a wonderful day.  He played all of his favorite games, read all of his favorite books, watched an especially riveting episode of Sesame Street, had lots of fantastic food, cuddles, kisses, humped the crap out of his giant teddy bear (we have come to accept this as normal), and was, on more than one occasion, delightfully held upside down by his feet (he laughs so hard and squeals in delight).  Then mom (me), maliciously intent on executing an evil plot to ruin his perfectly sweet-ass day, had to go and bust out the toothbrush.  He has 8 teeth and counting, and every night I dread having to brush them (we have tried every method of administering oral hygiene, seriously).  Anyway, he began having a tantrum so ferocious that it spiraled out of control.  He was turning bright red, gurgling, and practically convulsing from sheer anger.  He neither wanted to be held nor put down.  It was a 9.0 on the Richter Scale and I am quite sure his rage quake was felt in both Fairbanks and Lichtenstein.  Carter’s screams rivaled those of his days of colic (92 days of 10-12 hours of straight wailing) and I felt my heart rate begin to quicken, then full out pound in my chest.  All efforts to calm him were futile…the old bag of tricks was quickly depleted and after a long day at work and a long day of caretaking for this crazy, amazing little man, I closed my eyes and had a quick fantasy of packing my bags and escaping to Fiji, or just taking a shortcut and having an icy plummet off of the Hoan Bridge. Obviously neither of those “solutions” were viable, so I turned off the light, on went the white noise machine (GET ONE) and I clutched him tightly against myself as we rocked in the chair in his room. As he calmed down finally, he let his little body unclench and his rage fade away with exhaustion and a remembered love for mommy. I felt his tiny yet strong hand petting my finger and sensed his chest rising and falling against mine; a wave of love and protective instinct washed over me so powerfully I was brought instantly to tears.


In just a few moments I had literally experienced the full spectrum of human emotion.  Naturally, to non-parents, this all probably sounds like an absurd overreaction, but trust me, if you’re not yet a mom, you WILL understand when you are. This of course, is not the first time I have felt this way, and I am fully, painfully aware that it won’t be my last.  Every mom that I have ever spoken to about these feelings can empathize.  I am convinced that this is a universal experience for each caring, loving mommy that was just never explained to us while we were getting on the wild Ride of Motherhood.  How could it be though?  It’s too powerful and alien for even a hormonal expecting parent to understand until that first “one of those nights” is experienced. I certainly have never felt like such a conflicted psycho in my life!

Of course, as cliché as it sounds, it is absolutely worth all of the stress, exhaustion and worry.  There is peace in knowing that there is always more wine in the world than we can individually drink, and for every “one of those nights” we have gone through together, we have had many, many more “one of those days” that are so awesome, we don’t really want to put him down to sleep because his smile is missed so dreadfully!

As for the temporary insanity, I’ll take it…or leave it…but take it definitely…well, I’ll leave it all behind…nah I’ll take it!