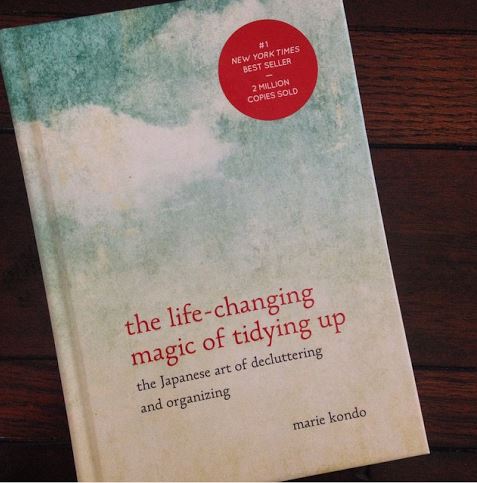 if you’ve been here for a bit, you know that i am all about simplifying. simplify was my one word in 2014 and it worked. it helped.

i am one to have stuff. and i don’t even know what it all is. there are always piles stacking up until they tip over or shirts that haven’t been worn in ions but lord knows if i get rid of it, i will find something that i need it for. or gifts that i have been given that still have the packaging on them but i don’t want to get rid of in fear of hurting somebody’s feelings.

it didn’t realize it until after i read this book that all this stuff that i have; it is giving me anxiety. why can’t i just pair down and live simply for the LOVE?!?! i mean i get rid of stuff all the time. andrew asks what i did when he gets home and nine times out of ten i say cleaned. organized. sorted. he just looks at me with the again??? face on. god bless the man.

i saw marie kondo’s book before i heard all the hype on the internet about it. it was on an end-cap at target and it intrigued me. but then it sat on my shelf for a bit. i skimmed it a few times and kept putting it back. i’ll get to it, i’ll get to it.  then came all the instagram hype and people were blogging about how they put the books methods into action and yada yada. so i picked it up one more time. read about twenty pages. grabbed a highlighter. went back to those first twenty pages and colored in the passages i wanted to remember. three days later i was done with the book and a day later my closet was being torn to shreds.

there were about a dozen other passages that i wish i could quote but a few weeks after i finished the book, i had a friend come over and i practically thrust the book into her hands demanding that she at least read the highlighted parts because she’s pregnant and hello? nesting! and how it will change her life and she probably just took it because she was being polite. (hi morgan.)

i got rid of a lot of stuff when we moved down here from milwaukee last year. last summer and fall i unloaded that house and was making weekly trips to goodwill for at least two or three months. i thought i was down to the nitty gritty already. but i didn’t realize i had been asking myself the wrong question when i start the whole getting rid of stuff process. my inner voice question has always been will i use this again? how long has it been since the last time i wore it? will i miss this if i get rid of it? wrong questions. the recommended question to ask yourself is does this bring me joy?.

i went through every nook and cranny of this house. it explains how to organize and sort your home into categories. not rooms. never would have thought of that on my own but once i tried it, it made so much more sense.

i started in the closet, worked my way through shoes, accessories, etc. moved to the books, homeware, papers, miscellaneous stuff (kitchen stuff, craft supplies, etc.), and personal belongings (pictures, cards, stuff of that nature). i spent a few hours for four days working on this. except for the first day. the first day was my closet and it was a sunday so andrew was home and even though addison was always under my feet sitting in shoeboxes and whatnot, i spent a good six hours in there.

i became obsessed. in the end, i came out with twenty garbage bags of things i was donating to goodwill and two packed thred up bags waiting to be shipped out. it felt so good to have the whole house down to only the things that brought us joy. i skipped around our house for a few days with a big ole smile on my face because i was so proud of myself.

ready to do something more with our time than organizing and cleaning and sorting.