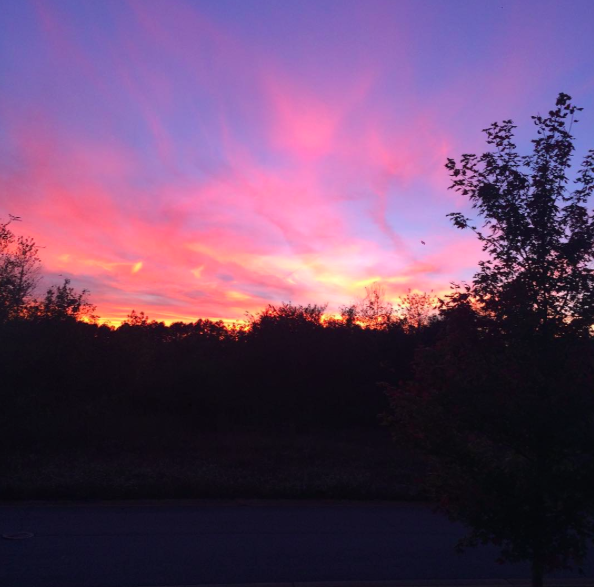 this picture really has nothing to do with what i have to say but a pretty sunset makes anyone wants to look right?

it’s november 5th. too soon to bring out the christmas decorations? whatever they’re coming out today. they may not be going up yet (mostly because one of my closest girls is coming to visit this weekend) however, monday morning these halls will be decked!

here’s the scoop. when we found out i was pregnant and due in december, i thought with that due date, it would make me a completely stressed out nut bag. between moving the girls bedrooms and decorating a nursery, plus holiday cards, christmas presents, a llllll the wrapping, and decking the halls (and hey, might as well have everyone to our house again this year because i’m sure as heck not going anywhere days after i pop out a baby), i immediately thought i would get hives and stress contractions and panic attacks by now.

but it turns out, this whole due-in-december deal is the best thing that could have happened to our family. i’m telling y’all, the christmas presents are almost all bought already. the menu for both christmas dinners with our families are set to go with a husband who pretty much knows the jist of what i want things to be like. i have both girls’ christmas dresses picked out and just need to buy them. pictures are scheduled with a photographer so when we get the digital’s we can turn them into pretty pretty cards to send out in the first few days of december. all the christmas boxes have been accounted for and ready to come out of hiding, plus all the new pretties at target in the holiday aisle will be scooped up by me in no time.

the finishing touches are going on the nursery when andrew gets home this week. addison’s room is put together, minus anything on the walls because i just can’t figure it out yet for her but it’s okay because she kicks the wall now when she’s drifting off to sleep so at least nothing is falling on top of her. and really, i’m in no hurry. she’s pretty content with all her stuffed animals and books that i don’t think she gives two hoots about what’s on (or not on) the walls.

i’m now realizing that the sole purpose of this post is to remind myself years (or perhaps just next year) down the road that sometimes i am on top of things and can get things done early. lest i forget because if we’re being honest with each other, the things i mentioned above about being early with everything and having a lot done already will likely never happen again. i totally deserve a glass of wine. i’ll wait though.